Haydn: Cello Concerto No. 2
This evening, cellist Julie Albers makes her third Symphoria appearance. At her first, she offered a 20th-century masterpiece, the Elgar; at her second, she took on the 19th century with the Dvořák. Tonight, she continues this backwards journey, reaching into the 18th century with a performance of the 1783 Concerto in D by Franz Joseph Haydn (1732–1809). As Julie hears it, this is an “enormously lyrical, pretty happy-go-lucky” piece. Yes, there are a few dark moments, especially in the minor key passage in the third movement; for the most part, though, sunshine prevails. Yet it’s also technically challenging. The difficulties begin the moment the cello enters. The opening melody, Julie says, might seem simple if you try to sing it. But “as soon as you put it on the cello, you have to deal with the logistics of shifting up and down the A string frequently, with no bumps and perfect intonation in order to create this beautifully simple melody. This can be stressful!” The conflict between that easy-going spirit and the stress on the performer provides the greatest challenge: the soloist has to make the treacherous sound simple. And to do that, “you have to have thought about and shaped every single detail, including the speed of the bow, the speed of the shift [moving your hand from one position to another on the fingerboard]... all of these things that people listening would never really know about.” Finding “the longest phrases that you can” and catching precisely the right tempo are key, too. Get it all perfect, and the sunny spirit prevails; without the right preparation, however, it can easily sound labored.

What should you listen for? Julie’s favorite spot is in the second movement, a passage in double stops: “it’s so touching and so tender.” But my guess it that wherever you turn your attention, you’ll find yourself hooked.

When he wrote this concerto, Haydn was something of an outsider, working as kapellmeister at the court of the Esterházy princes. While they admired his work and gave him a spectacular orchestra to work with, they kept him as a glorified lackey, away from the musical centers of Europe. Only later on did Haydn travel
the world as a star—achieving particular success in England.

Brahms: Symphony No. 4
We close the concert with the Symphony No. 4, a work representing Brahms the radical, once again contradicting conventional wisdom. Brahms, we’re often told, was the late 19th-century’s strongest defender of traditional values against the onslaughts of such revolutionaries as Wagner. And in a way, he was. But by the time he wrote this symphony in 1884–85, Wagner had already died—and the battle between them, more a product of the critics of the day than of the composers themselves, was beginning to seem a thing of the past. Once outside that media circus, the forward-thinking aspects of Brahms’s music became more and more audible, to the point where Schoenberg—the leader of the most aggressive wing of modernism in the first half of the 20th century—could eventually proclaim him “Brahms the Progressive.”

One key aspect of Brahms’s modernism is his ability to draw maximum musical power from a minimum of musical material. (That’s the bit of Brahmsian genius missed by Hugo Wolf,
one of the most ardent Wagnerians, when he sneered that Brahms had mastered the art of composing without ideas.) Take the Fourth’s opening theme. It’s built out of nothing but a chain of falling thirds—but by flipping every other pair so it becomes an upward sixth, Brahms turns it into a sighing theme of utmost poignance. That kind of economy marks the whole symphony—there’s nothing extra, nothing extravagant, yet the totality presents a richness perhaps unequalled in Brahms’s output. Then, too, there’s the rhythmic interplay of Brahms’s inner lines—sufficiently intricate that composer-conductor Gunther Schuller described him as a precursor of Stravinsky and Ives. Yet so assured was Brahms as a composer that he was able to cloak this radicalism in attire that didn’t disrupt late 19th-century norms.

Just as the Fourth blends the traditional and the forward-thinking, so it merges the tragic and the triumphant—which has led to debate about its dramatic trajectory. For some critics, it traces out a descent into darkness. Conductor Larry Loh sees it quite differently. Yes, there are elements of tragedy in the first movement, pointing, among other things, to the “heart- wrenching” second theme. But the second movement “draws us out of that,” beginning with what he hears as “sounds echoing in a cavern.” The third movement, brightened by the addition of piccolo and triangle, is surprisingly “upbeat and positive.” The key to it all, though, is the finale, which bursts forth with the entry of the trombones, silent until now. In structure, it’s a passacaglia, a strict baroque form that consists of a set of variations on a repeating and unchanging bass—in this case, a series of eight chords, loosely based on Bach’s Cantata No. 150. Yet its formal strictness is belied by what Larry calls the “incredible amount of variety” (another example of getting the most music out of minimal material): as it goes through a wide range of emotions, it’s less a set of separate variations than a constant “transformation.” The movement reaches a point of stillness in the middle, as the flute dominates—but then “when the trombones come out of that, it's like a slow rise and then we get back to the faster tempo. And it ends with a kind of exclamation mark, much faster than you think it's going to.” A striking conclusion to Brahms’s symphonic output. 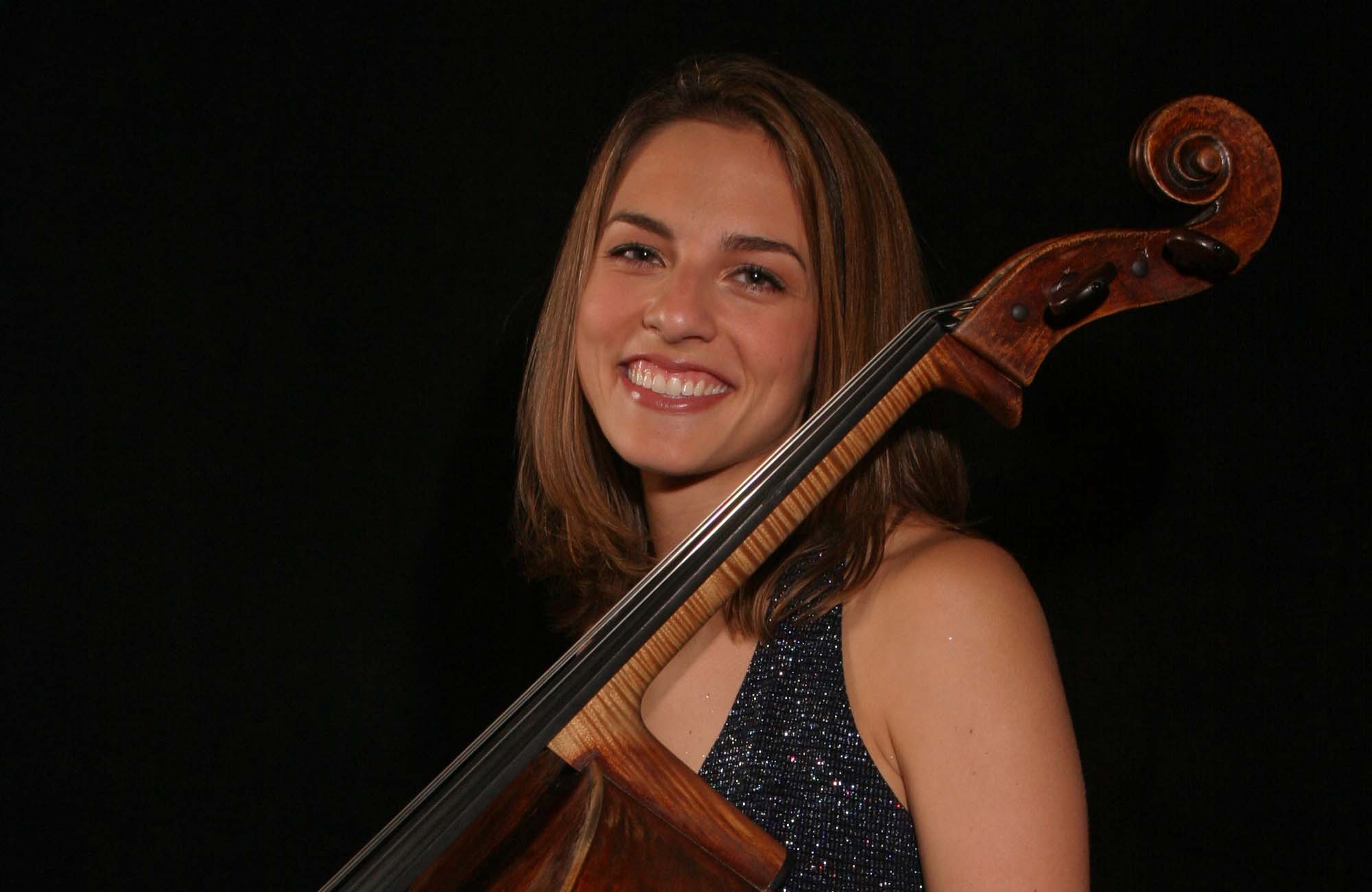 Julie Albers made her major orchestral debut with the Cleveland Orchestra in 1998, and thereafter has performed in recital and with orchestras throughout North America, Europe, Korea, Taiwan, Australia, and New Zealand. In 2001, she won Second Prize in Munich’s Internationalen Musikwettbewerbes der ARD, and was also awarded the Wilhelm-Weichsler-Musikpreis der Stadt Osnabruch. While in Germany, she recorded solo and chamber music of Kodaly for the Bavarian Radio, performances that have been heard throughout Europe. In 2003, Miss Albers was named the first Gold Medal Laureate of South Korea’s Gyeongnam International Music Competition, winning the $25,000 Grand Prize.

In North America, Miss Albers has performed with many important orchestras and ensembles. Recent performances have included exciting debuts on the San Francisco Performances series and with the Grant Park Music Festival where she performed Penderecki’s Concerto Grosso for 3 cellos with Mr. Penderecki conducting. Past seasons have included concerto appearances with the orchestras of Colorado, Indianapolis, San Diego, Seattle, Vancouver; St. Paul Chamber Orchestra, and Munchener Kammerorchester among others. During the 2014 -15 season, performances included appearances with the Winnipeg Symphony, Oklahoma Philharmonic, San Antonio Symphony, St. Paul Chamber Orchestra, and Albany Symphony where she premiered a new concerto by Michael Torke. Upcoming performances include recitals with pianist Orion Weiss at the Schubert Club in St. Paul, MN and the Orange County Philharmonic Society in Costa Mesa, CA along with appearances with orchestras such as the Colorado Music Festival orchestra, the Ann Arbor Symphony, the Rochester and Rhode Island Philharmonics, amongst others.

In addition to solo performances, Miss Albers regularly participates in chamber music festivals around the world. 2009 marked the end of a three year residency with the Chamber Music Society of Lincoln Center Two. She is currently active with the Albers String Trio and the Cortona Trio. Teaching is also a very important part of Miss Albers’ musical life. She currently is Assistant Professor and holds the Mary Jean and Charles Yates Cello Chair at the McDuffie Center for Strings at Mercer University in Macon, Georgia. Miss Albers was named principal cellist of the St. Paul Chamber Orchestra in 2014 and begins her position there in Fall 2015. Miss Albers’ debut album with Orion Weiss includes works by Rachmaninoff, Beethoven, Schumann, Massenet, and Piatiagorsky and is available on the Artek Label. Julie Albers performs on a N.F. Vuillaume cello made in 1872 and makes her home in Minneapolis with her husband, Bourbon, and their dog, Dozer.