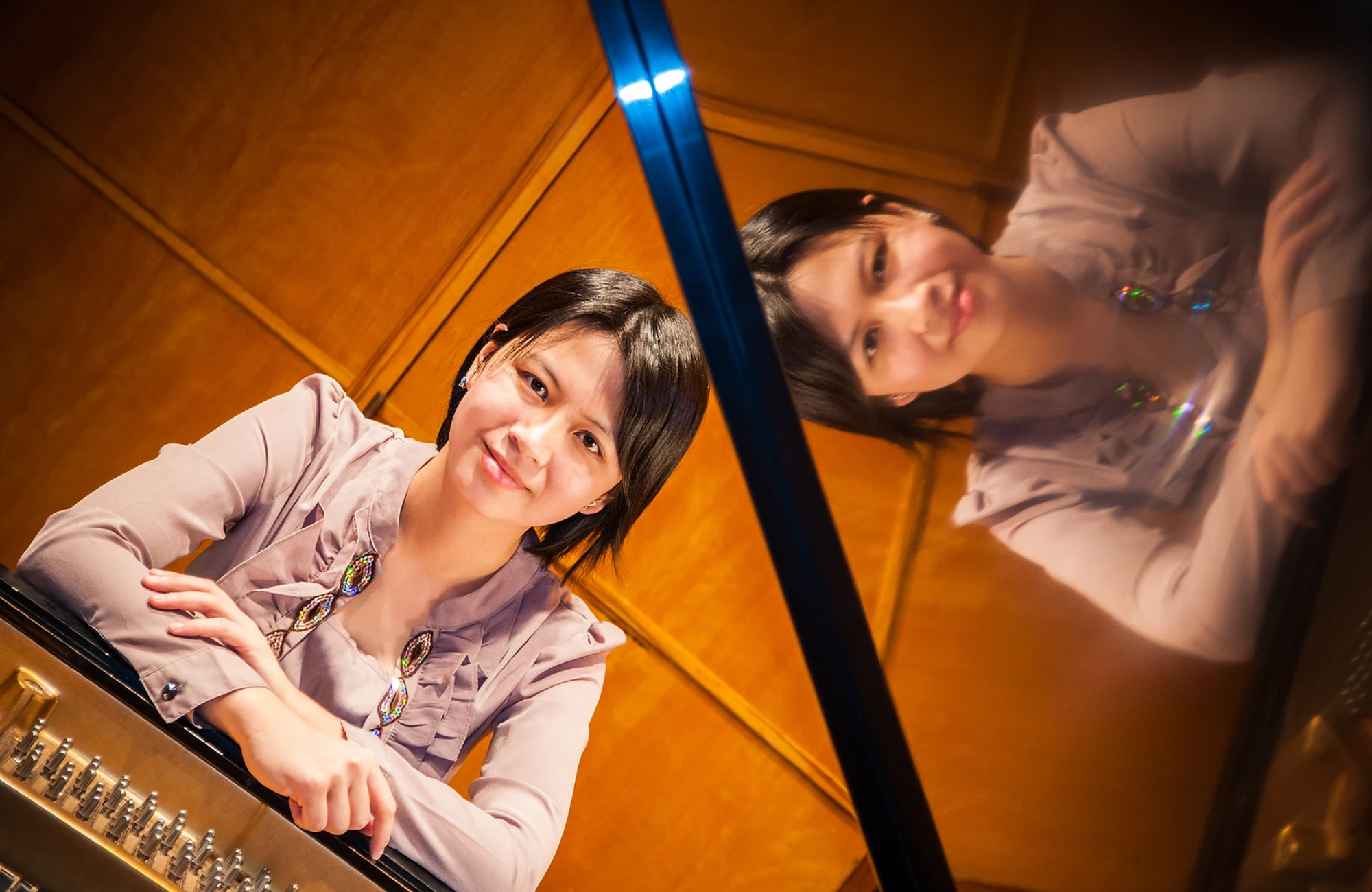 Patrons are invited to enjoy light refreshments and cash bar for this performance at the WCNY Studios.  Pianist Theresa Chen is featured in McPartland’s Silent Pool, and Heather Buchman leads Symphoria in Marion Bauer’s Symphony No. 1. 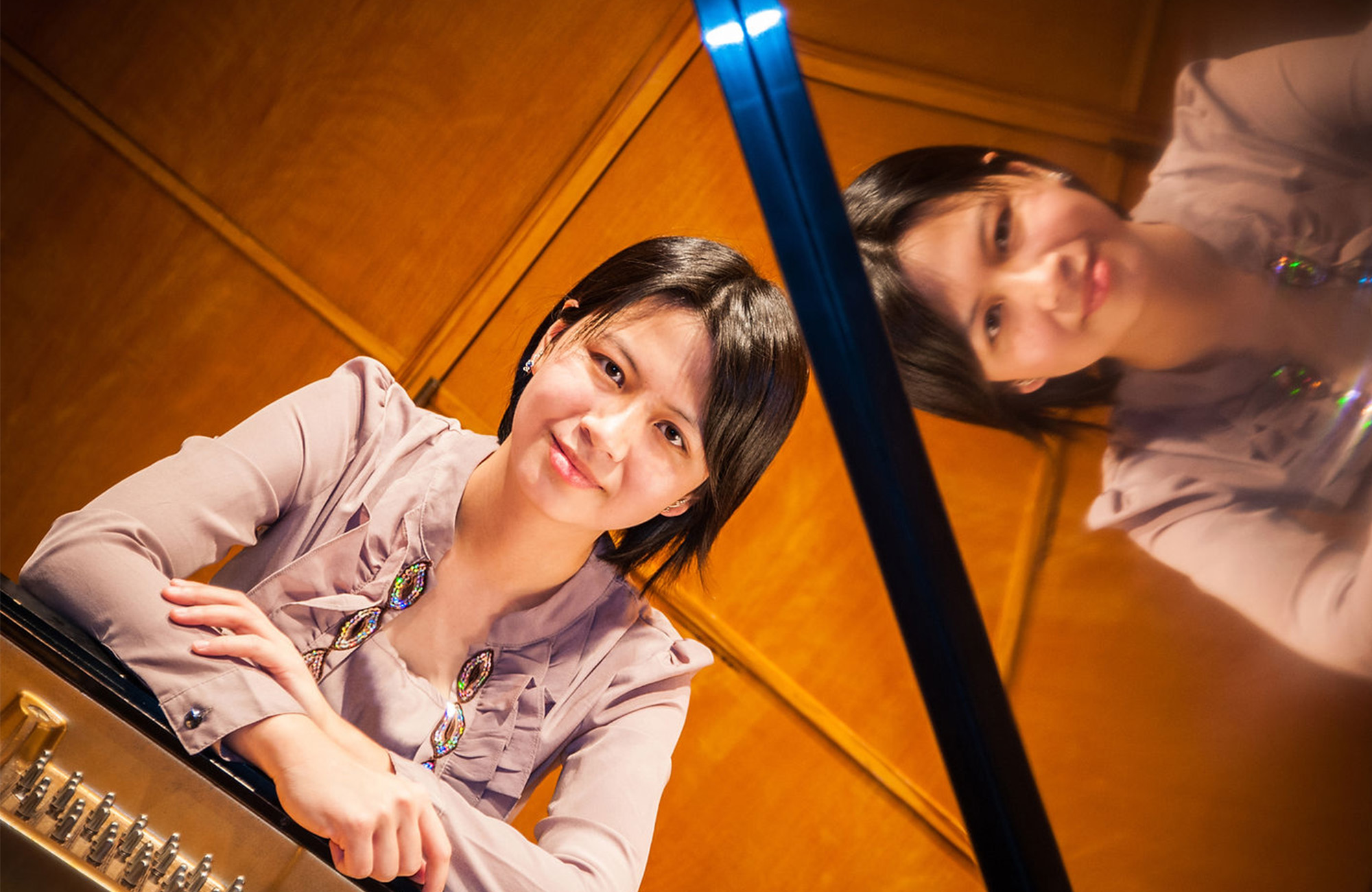 Theresa Chen, D.M.A., is an active, well-rounded musician. She is an improvising keyboardist, accompanist, composer/arranger, pedagogue, and Catholic music minister.
​
Dr. Chen is an instructor of applied jazz piano, songwriting, history of jazz, and director/co-director of jazz/funk combo and Orange Juice jazz ...

Theresa Chen, D.M.A., is an active, well-rounded musician. She is an improvising keyboardist, accompanist, composer/arranger, pedagogue, and Catholic music minister.
​
Dr. Chen is an instructor of applied jazz piano, songwriting, history of jazz, and director/co-director of jazz/funk combo and Orange Juice jazz combo at Syracuse University. She is the first Taiwanese-American who teaches jazz at the college of music in the United States. She has previously taught Functional Jazz Piano courses and secondary jazz piano lessons from 2013-2018 when she was a teaching assistant at the Eastman School of Music. She also has given a diverse series of clinics, lectures, and masterclasses around Taiwan and America. Her first jazz album, Whispering to God, was released digitally in December 2021 and physically in July 2022.
​
Dr. Chen has shared the stage with famous jazz artists such as Gary Smulyan, Ingrid Jensen, Dave Liebmann, Bria Skonberg, Boris Kozlov, Victor Provost, and Scott Wendholt. She also performed at the Rochester International Jazz Festival, WGMC-Jazz90.1 Radio Station, Civic Morning Musicals, Syracuse Opera, and many other prominent jazz venues in Taiwan and Central New York.
​
Dr. Chen never stops promoting the music of her own culture. In November 2013, she was involved in the composer’s project held by the Ethnomusicology Department at NTNU. Her two arrangements of two Taiwanese folk songs, “Latin Ferry” and "Fantasy on a Theme of Flowers in the Rainy Night", were recorded on an album “The Sound of Antique,” performed by Taiwanese flutist Dr. Chia-Fen Tsai and published. Her other two works, “The Song of Taibalang” and her arrangement of Mary Lou Williams' "Lonely Moments," won the Outstanding Composition and Outstanding Arrangement--Small Ensemble at Graduate College category of the 2017-18 Downbeat Student Music Awards.
​
Dr. Chen is devoted to a series of performance projects on women jazz instrumentalists, historical improvisations, jazz in Asia, pedagogical methods of jazz/commercial music theory/history, and jazz music applied in Christian liturgies. Invited by the Jazz Education Network(JEN) in January 2016 and 2020, she presented her research about Marian McPartland’s solo piano ballad playing and free improvisation style. In January 2022, she was invited again to the same conference in Dallas to give a clinic on teaching college-level songwriting classes on the subject of jazz standards. The same year in summer, she was invited to create jazz/commercial music teaching materials for high school students in collaboration with the National Taiwan Normal University(NTNU) and the Department of Teacher and Art Education from Ministry of Education. In the beginning of 2023, she will publish her two papers on teaching jazz standards writing and stride piano playing in the latest issue of Jazz Education in Research and Practice.
​
Born in Buffalo, New York, and raised in Chiayi, Taiwan, Dr. Chen received her Bachelor of Fine Arts degree in classical piano at National Taiwan Normal University(NTNU) in 2013 with the Certificate of Digital Visual and Sound Arts and minors in flute and voice. In 2015 and 2018, she earned Master of Music and Doctor of Musical Arts degrees in jazz piano performance at Eastman School Music, with a minor in Music Theory and a Certificate of Advanced Achievement in the Art of Improvisation. She has studied jazz and historical improvisations with the legendary jazz pianist Harold Danko, Gary Versace, Bill Dobbins, Dr. Dariusz Terefenko, Vincent Lenti, and organist/harpsichordist Edoardo Bellotti.
​
Dr. Chen is also passionate about organ and sacred music. So far, she has served at many Catholic churches in both Taiwan and America including St John's Cathedral in Chiayi City, Sacred Heart Church at Guting, Immaculate Conception Church at Fu-Ren University, St. Paul's Church at Xinchuang, and St Anne Church in Rochester, New York. She now serves as the music director and organist at the Most Holy Rosary Church in Syracuse, New York, and the sub-dean of the American Guild of Organists-Syracuse Chapter. She has hosted many workshops in organ improvisations, hymn accompanying, and transcribing.
​
Thanks to the pandemic, Dr. Chen enjoys other interests besides art such as American and Taiwanese cultures, meteorology, ornithology, psychology, feminism, French, herpetology, interpersonal relationship and communications, geology, geography, and geometry.

She has developed various artistic collaborations at Hamilton College, including a fully staged production of Tchaikovsky’s Nutcracker and a new interdisciplinary event, called Sight/Sound/Spoken, mixing chamber music with performances by creative writers and displays of student artwork. Her interests include experimenting with concert format; performing in nontraditional, informal, and architecturally unique spaces; mixing performance and education (as in the Brainstorm series with Hamilton College Orchestra); and in a wide range of collaborative work.

Buchman’s work in regional arts advocacy has been recognized by a citation from the Society for New Music in 2013 and Civic Morning Musicals’ Ruth Edson Award in 2014. She serves on the board of CNY Arts, a regional organization working with NY State Council on the Arts and other funders for supporting and promoting arts and culture in Central New York. In 2012 she received Hamilton College’s Class of 1963 Award for Outstanding Teaching. She served on the ad hoc committee that developed Hamilton College's educational goals.

Buchman completed professional studies in conducting at the Juilliard School, earned a M.M. in orchestral conducting from the University of Michigan, and a B. Mus. degree in trombone from the Eastman School of Music. More recent studies include conducting workshops in St. Petersburg, Russia.

She served as Principal Trombonist of the San Diego Symphony from 1988-1997. She won prizes at the ARD International Music Competition in Munich, Germany and the New York Philharmonic Young Artists Concerto Competition.

A more recent path of exploration has been the study of ballet. She explores the parallels and intersections between music and dance in her teaching and in performance. Other interests include the connections between music/sound and other art forms and fields, and developing collaborations grounded in these connections.
+ Google Calendar+ iCal Export