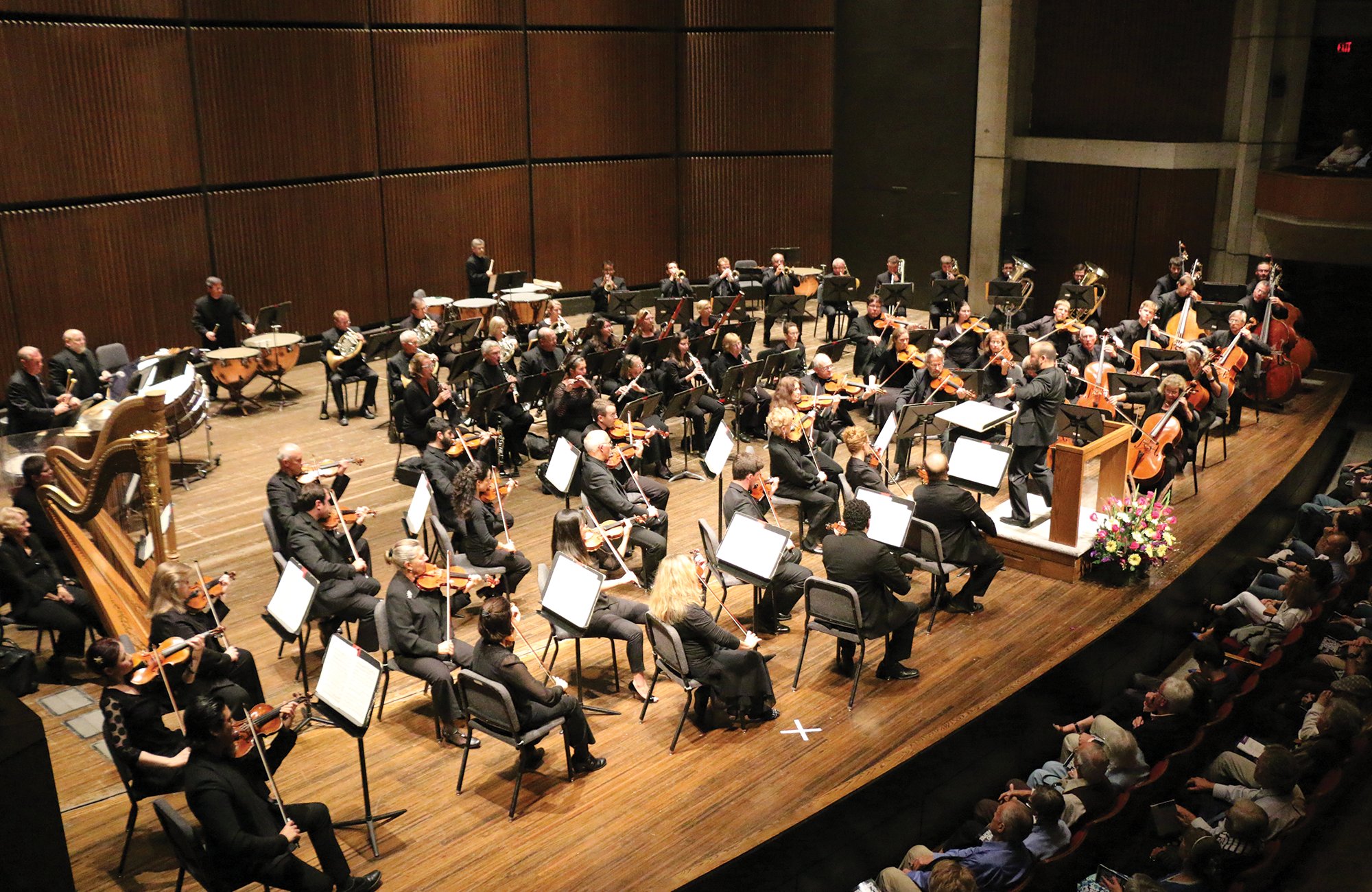 Symphoria principal winds and strings are featured in Beethoven’s Septet, which was also his most popular work during his lifetime. The program begins with Samuel Coleridge-Taylor’s Danse Negre, which is filled with swinging rhythms and repeated melodies. Dvorak’s dramatic and austere Symphony No. 7, with it’s ominous opening on through the rhapsodic finale completes the program.

Due to Covid-19, the Syracuse University Oratorio will not appear on this performance.

Tonight’s original program centered on a pair of Brahms choral works. When Covid
thwarted our plans, we decided to turn our loss into a gain by adding an installment to our celebration of Ludwig van Beethoven’s 250th birthday, bringing you his Septet, composed in 1799.

Why choose this piece? We had several reasons. First, it enriches our appreciation of Beethoven’s range. The default image of Beethoven is of a stormily defiant artist, breaking with convention and producing shattering masterpieces that rerouted musical history. While that’s true, it’s incomplete. Beethoven had a more amiable ...
Tonight’s original program centered on a pair of Brahms choral works. When Covid
thwarted our plans, we decided to turn our loss into a gain by adding an installment to our celebration of Ludwig van Beethoven’s 250th birthday, bringing you his Septet, composed in 1799.

Why choose this piece? We had several reasons. First, it enriches our appreciation of Beethoven’s range. The default image of Beethoven is of a stormily defiant artist, breaking with convention and producing shattering masterpieces that rerouted musical history. While that’s true, it’s incomplete. Beethoven had a more amiable side as well. Nowhere is this more evident than in the Septet, written at the same time as his heaven-storming Pathétique Sonata. The fact that it’s in six movements, rather than the four traditional in symphonies, says something about its spirit: its origins go back to the light entertainment music—serenades and divertimentos—of
the classical era (Mozart is a major inspiration). The theme-and-variations fourth movement is based on a popular folk song; the minuet draws on his then-unpublished Piano Sonata op. 49/2, a simple work now well known to young pianists.

Second, the Septet gives many of our principals a chance to sparkle. Calling for clarinet, horn, bassoon, violin, viola, cello, and double bass, it deploys its novel combination of instruments in an inventive variety of ways. Sometimes, they sound like a small, unified orchestra; sometimes, the winds and strings play off against each other as separate groups; sometimes, a soloist takes a concerto-like turn (there’s even a violin cadenza in the finale).

Third, because of the way our musical life is organized, you may never have heard a live performance of the Septet before. Nowadays, concerts are rigidly separated into recitals, chamber-music concerts, and orchestral concerts—and the Septet falls between the cracks, too large for most chamber music concerts, too small for orchestral concerts. That wasn’t always the case. When it was composed, concerts often interleaved works by ensembles of different sizes: the Septet was premiered alongside Beethoven’s First Symphony and some solo piano improvisations. Since the pandemic has altered what we expect from a concert (hence our season
slogan, “Expect the Unexpected”), now seemed a good time to take advantage of our players’ chamber-music expertise and present a work you don’t hear that often.

“A work that you don’t hear that often”: that description would have surprised Beethoven. During his lifetime, the Septet was his most popular piece—so popular that he grew to hate it (just as Rachmaninoff grew to hate his Prelude in C-sharp Minor) because it crowded out what he considered his more important pieces. But over the years, to our loss, it’s been pushed to the side.

We open with another work that has been pushed to the side: the Danse nègre by Samuel Coleridge-Taylor (1875–1912). Born in London, Coleridge-Taylor was the foremost Black composer (and conductor) of classical music of the period, a prodigy mentored by the cream of the British musical world. Indeed, he got his start when Elgar, unable to accept a commission, suggested Coleridge-Taylor as an alternative. He was especially popular in England and the United States, where there was even a singing society named after him.

Unfortunately, he was not financially astute. Selling the rights to his hugely successful Wedding Feast for a pittance, he lost out on the royalties that would have secured his well-being. As a result, he found himself composing salon trifles and conducting, often on a grueling schedule, to earn money. (This helps explain why he succumbed to pneumonia at an early age). But he also continued to write large-scale concert works, many of which incorporated African, African-American, and Native American elements. Danse nègre was originally written for piano and strings, later included in a suite for piano (African Suite), and eventually orchestrated.

We chose to open with Coleridge-Taylor not only because we wanted to introduce you to some unfamiliar but wonderful music but also because he pairs well with Antonín Dvořák (1841–1904), whose Symphony No. 7 (1885) closes the evening. The connections between the composers are deep: Coleridge-Taylor toured with African-American singer and composer Henry T. Burleigh, who was both a student of and inspiration to Dvořák during his American years; and Coleridge-Taylor was greatly influenced by Dvořák’s use of folk materials. And yet
the contrasts between the two pieces are profound, too. Like Beethoven’s Septet, Coleridge- Taylor’s Danse nègre finds the composer in a light mood. But whatever we can say about the Seventh, it doesn’t catch Dvořák in a light mood. Nor does it turn to folk sources in the way that the Slavonic Dances or the Ninth Symphony (From the New World) do.

Dvořák wrote the Seventh for a prestigious commission by the Philharmonic Society in London—and two factors contribute to its seriousness of purpose. First, he wanted to make an impact, which in those days meant adopting the Austro-Germanic aesthetic. (The impression created by Brahms’s Third, premiered in 1883, only pushed him further in this direction).
Second, it was written in the wake of two significant deaths: of his mother in 1882 and of Smetana, the trailblazer of Czech nationalist music, in 1884. The Seventh has never been quite as popular as the Eighth and Ninth; but many listeners,
including conductor Larry Loh, rank it as their favorite. Why? For Larry, it’s the most
concentrated of Dvořák’s symphonies, with a “grandeur and depth that really appeal to me.” Grandeur and depth—and tension. For throughout, Dvořák keeps turning the screw. Larry points, for instance, to the frequency with which “the dotted rhythms come in unexpected parts of the bar”—a technique that “holds on to the tension more than you expect.” The harmony, too, creates tension in a manner “similar to Brahms.” More generally, it’s a work that rarely relaxes and never shifts into autopilot. What’s the conductor’s major task? Resisting the temptation, says Larry, to “plummet to the depths of every moment—you need to hold back and pace it in a way that lets you really build to the climax.”

The Seventh begins with a menacing tremolo that continues under the first theme, and even the lyrical second theme barely dissipates the anxiety. The poignant second movement seems to come straight from a pained heart. Following a dance-inspired, but hardly gentle, scherzo, the finale arrives with a cry of anguish. The symphony eventually winds up in a dramatic D Major, with its closing measures, as Larry points out, sounding almost like an organ. Triumph? Or grim fortitude? For all its power, the ending is shadowed in ambiguity.

Date:
November 7, 2020
Time:
7:30 pm
BUY TICKETS
Series:
Masterworks
Pre-Concert Talk:
Music Director Lawrence Loh presents a Pre-concert Talk on stage one hour prior to this performance. Free with ticket purchase.
Running Time:
2 Hours, including 20 minute intermission
Doors Open:
This performance will be livestreamed. There will be no in person attendance at this concert.