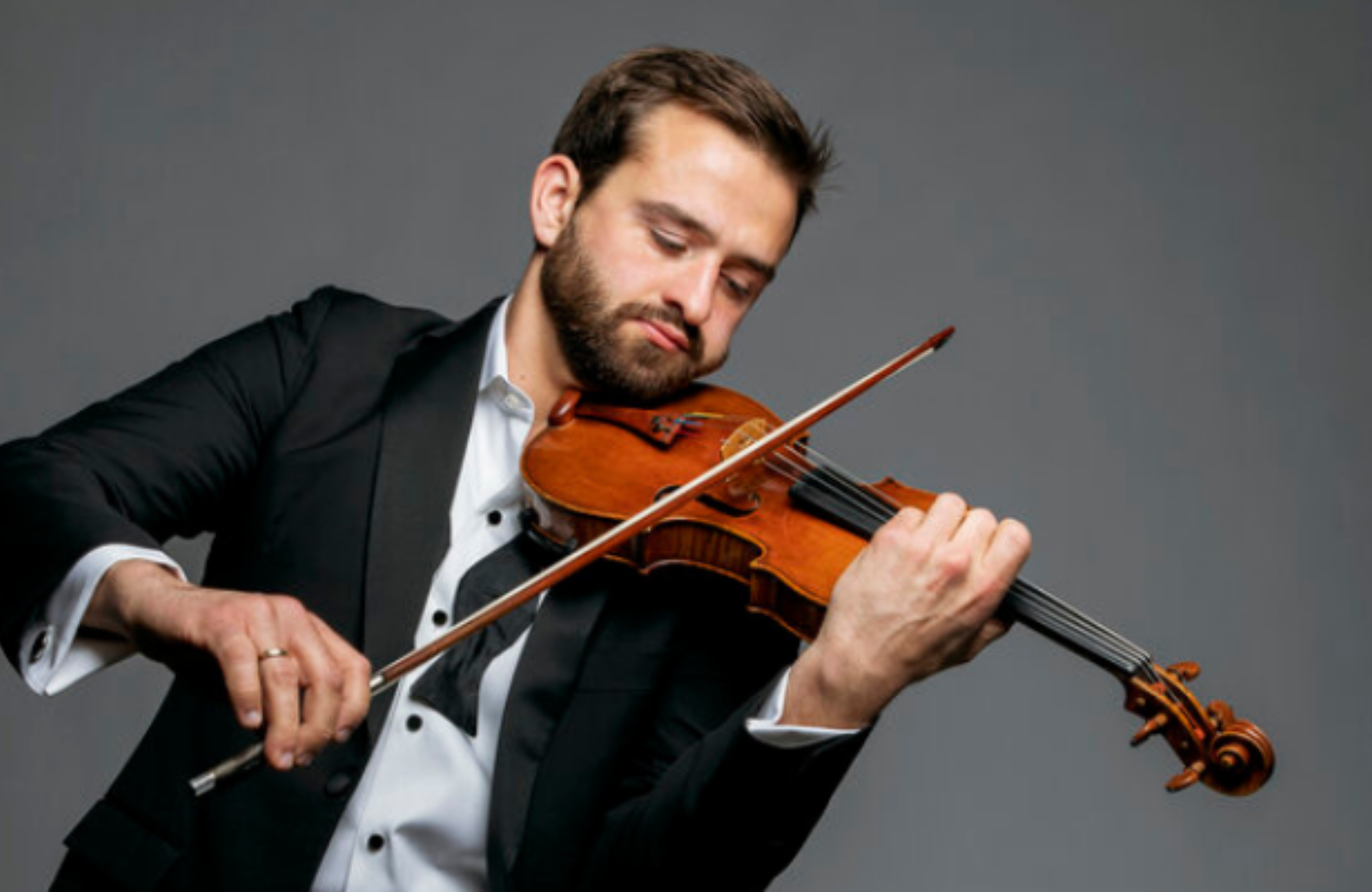 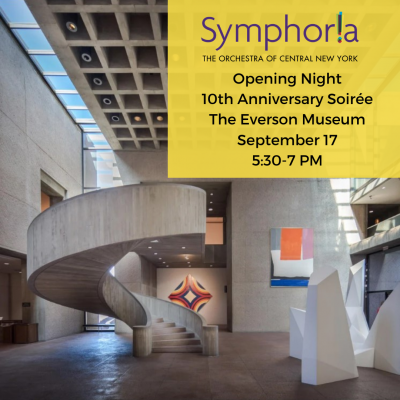 Join us at The Everson Museum before the concert for drinks and hors d’oeuvres in celebration of the Opening Concert of our 10th Anniversary Season! Turn the concert into a complete experience in the elegant Sculpture Court of the museum and outdoors on the museum podium if weather permits. Music Director Lawrence Loh will be making a toast to Symphoria and all of you!

Catering by Oh My Darling with a Cash Bar

Stylistically, though, they eventually moved in diametrically opposite directions. Rachmaninoff remained loyal to romantic ideals, to music as emotional expression. Stravinsky, in contrast, was a committed modernist increasingly concerned with abstract musical form. He once called Ravel a Swiss watch-maker—but the description could apply as much to him, especially in his later works. Of course, neither Rachmaninoff nor Stravinsky was as pure as that. Rachmaninoff, especially in such later works as the Symphonic Dances and the Third Symphony, experimented with more modernist techniques. Stravinsky, as you will see tonight, was never as chilly as he was sometimes alleged to be. But we chose them to open our season precisely because they play off against each other so well.

Rachmaninoff wrote his Symphony No. 2 in E Minor in 1906 in Dresden. Nearly a decade earlier, his First Symphony had suffered a disastrous premiere. The failure was due to an inadequate performance rather than to any inadequacy in the music; even so, the debacle threw the young composer off balance for years. With the help of therapy from Dr. Nicolai Dahl, however, he recovered; and propelled by the immense success of his Second Piano Concerto, and energized by his marriage and the birth of his first child, he regained the confidence necessary to take up the symphonic genre once again.

Under the circumstances, you might imagine a fresh, optimistic work. As I’ve said before, though, there’s no easy connection between a composer’s actual emotional state and the spirit of his or her music. Yes, the Second does end in resounding triumph. But elsewhere, starting with the somber opening of the first movement (which introduces material heard in various forms throughout the work), the Symphony is brimming with the kind of music that would serve to confirm Stravinsky’s supposed description of Rachmaninoff as a “six and a half foot scowl.” Indeed, as in much of Rachmaninoff’s music, the Dies Irae often casts its shadow. This theme, the plain-chant setting of the “Day of Wrath” from the Latin Requiem Mass, haunted Rachmaninoff throughout his life, appearing, often as a threat, in many of his compositions. It’s heard here most clearly in the second movement, where the horns announce it almost as soon as the movement starts.

Yet while much of the Second is gloomy, its combination of voluptuous harmonies, rich orchestration, and (especially) succulent melodies has made it one of Rachmaninoff’s most beloved works. Its melodic abundance, in fact, may be unmatched by anything else he wrote. For many listeners, the third movement Adagio—which features what’s arguably the most exquisite clarinet solo in the standard orchestral repertoire—stands out (no surprise that this movement has been taken up by several pop and jazz musicians). But in fact, there’s more ravishing melodic material in this one symphony than many composers produce in a lifetime. Even the momentum of the hard-driving second-movement Scherzo is interrupted twice for a melody of heart-stopping splendor, one that almost seems to come from a different world.

It would be hard to imagine anything more different than Stravinsky’s snappy Violin Concerto in D. Certainly, the two works are different in stylistic orientation. If Rachmaninoff’s hyper-romantic work takes Tchaikovsky as its North Star, Stravinsky’s neo-classical effort is guided by the spirit of Bach. (The Double Concerto for Two Violins and Orchestra was especially influential.) The two works are dramatically different in color, as well. If Rachmaninoff’s has deep luster, Stravinsky’s has a bright sparkle. What makes the Concerto’s lightness especially remarkable is that Stravinsky’s score calls for a larger brass-and-woodwind contingent than any other violin concerto in the standard repertoire (in fact, it’s marginally larger than what we find in the Rachmaninoff Second). Yet Stravinsky creates a delicate, chamber music sound, using his large orchestral complement to create a dazzling variety of colors rather than to generate the sheer weight and plush that Rachmaninoff favors.

Then, too, the works differ in scale. Rachmaninoff’s score is expansive. It’s by far his longest orchestral work—sufficiently so that, in the days before the composer was fully accepted into the canon, conductors used to introduce cuts. Stravinsky’s is about a third as long. (Each of its four compact movements, by the way, is introduced by a striking chord—which appears elsewhere in the piece as well—that Stravinsky called the Concerto’s “passport.” It stretches so widely that Samuel Dushkin, the violinist for whom the work was written, at first thought it unplayable.)

Most important, the Rachmaninoff, like nearly all his works, is profoundly serious. The Stravinsky is, in the words of tonight’s soloist Will Hagen, “so much fun. It’s a really comedic piece—so quirky, a groovy piece. If you play it as if it’s the second movement of the Beethoven”—or, for that matter, as if it’s the Rachmaninoff Second Symphony—“you’ve totally missed the point, and it’s going to fall flat.”

True, says Will, there’s some seriousness in the third movement, a moment of supreme melodic beauty. Bach may have been the immediate influence, but it’s hard not to think of Tchaikovsky as well. Indeed, only a couple of years separate the Violin Concerto from Stravinsky’s ballet Le baiser de la fée, based on themes by Tchaikovsky. On the whole, though, the Concerto is what Will calls a “dancy” piece, and he promises that he, conductor Larry Loh, and the orchestra will be “having a party.” The dance elements should be no surprise. Stravinsky competes with Tchaikovsky as the greatest composer for ballet; and even though the Concerto was written as an abstract concert work, George Balanchine saw its dance potential and used it as music for two different ballets. One of them, coincidentally, is returning to the New York City Ballet next week.

Our opening work, Umoje, by flutist and composer Valerie Coleman (b. 1970), has a strong dance impulse, too. Umoje is the Swahili word for Unity, the first principle of Kwanzaa—and the music started out as a simple song for women’s choir. Over the years, Coleman produced multiple versions, including an enormously popular version for wind quintet. But in 2019, it was significantly expanded into a full-orchestra work for the Philadelphia Orchestra with a more complex musical outline and a richer sonic palette (note, for instance, the use of bows on the mallet instruments at the very beginning). At the heart of the piece is still the same infectious melody, which, in the composer’s words, “dances and weaves throughout the instrument families.” But in the new orchestral version, it’s threatened by “dissonant viewpoints” representing “the clash of injustices, racism and hate.” In the end, though, affirmation triumphs: “Now more than ever,” says Coleman, “Umoja has to ring as a strong and beautiful anthem for the world we live in today.” Its dedication to community makes Umoja a perfect opener for our tenth anniversary season. 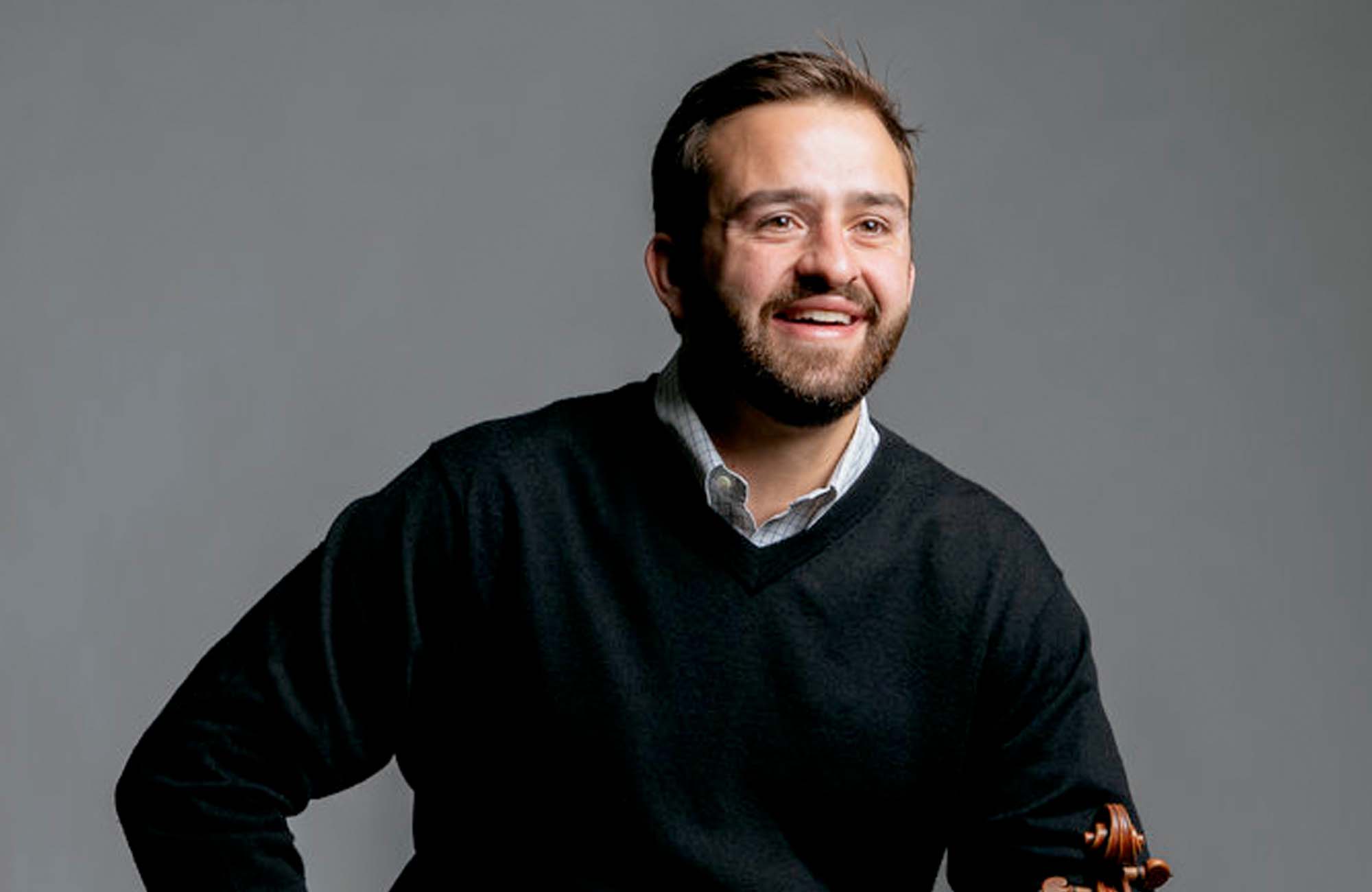