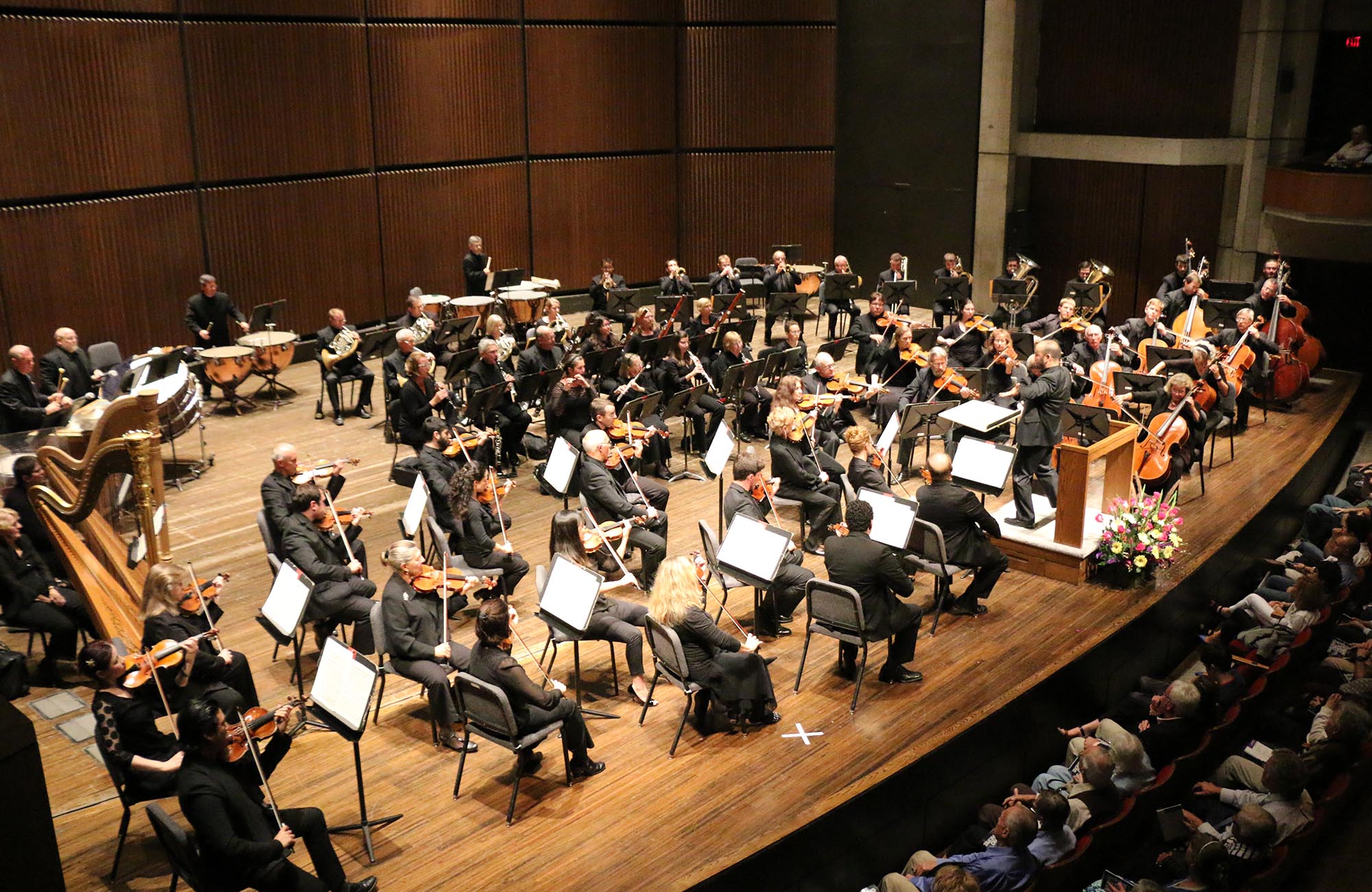 Symphoria features large chamber works on this performance, beginning with Mendelssohn’s vigorous Sinfonia No. 7.  After intermission, French composer Louise Farrenc’s Nonet is featured. Her lyrical Nonet was premiered with famous violinist and Mendelssohn protege Joseph Joachim. While Farrenc’s music achieved some popularity during her lifetime, it was underperformed for many years until it was rediscovered in the latter part of the 20th century.

One of the best is the String Symphony No. 7, written in 1821 or 1822. It’s the most substantial of the series up to that point—the longest and the first to include four movements rather than three. It begins with an Allegro displaying remarkable compositional self-confidence, both in the delightful contrapuntal interplay among the musical lines (this is really chamber music writ large) and in the color afforded by the nimble combination of pizzicatos and bowed strings.

Despite a touch of pungent harmony toward the end, the sweet Andante that follows (marked amorevole, “lovingly”) relaxes the tension; but that only makes the third movement more striking. It’s a Minuet and Trio with a difference—or, more accurately, two differences. First, although labeled a “Minuet,” it’s neither elegant nor something you could dance to; rather, it’s a vehement and syncopated scherzo, built on short melodic shards that come at you in ways that throw you off balance. Second, at the end of a Trio, it’s traditional to return to the Minuet. But not here, for Mendelssohn once again trips us up, this time by resisting convention and jumping to a coda that leaves us in the wrong key.

Mendelssohn has more up his sleeve, too, as the contrapuntal hints of the earlier movements blossom into full-fledged fugues in the finale. Mendelssohn was largely responsible for reviving interest in the music of Johann Sebastian Bach—and we can hear something of his admiration here. Admiration, but not piety: the teenaged Mendelssohn does not appear in any way intimidated by his model as he whips through the last movement.

The career of Louise Farrenc (1804–1875) had a lot in common with that of her contemporary Mendelssohn. She, too, was a prodigy, although not quite on Mendelssohn’s level; like Mendelssohn, she was famed for her piano virtuosity; and just as Mendelssohn launched the so-called Bach Revival when he conducted the Saint Matthew Passion, she too was dedicated to popularizing early music. She edited and published (working with her husband until his death) Le trésor des pianistes, a widely disseminated anthology that brought three centuries of keyboard music—Rameau and Couperin all the way up to Beethoven and Chopin—into the hands of innumerable pianists. She was also a distinguished teacher—more distinguished than Mendelssohn. She was the only woman in the nineteenth century to hold a permanent position as professor at the French Conservatory, where she taught piano for more than thirty years—although, as a woman, she was not allowed to teach composition.

Most important, though, she was a first-rate composer. Women composers, especially those before the twentieth century, had a difficult time making their voices heard—and an even more difficult time remaining in public memory. Farrenc was, during her lifetime, one of the more fortunate ones: she had an enlightened husband who supported instead of blocking her career, and she was lauded by Schumann and championed by Joseph Joachim, the greatest violinist of his age (he premiered the Brahms Concerto). But although her music was widely recognized and admired during her lifetime, it was quickly forgotten after her death.

Until recently. Times have changed, and the rise of feminism has led to a rediscovery of previously snubbed women artists. And now that Farrenc’s music has become increasingly available in new editions, it has taken the world by storm. We had hoped to perform her Third Symphony last season, but Covid shut the concert down—so today we’re doing our best to compensate with the 1849 Nonet. Premiered with Joachim taking the violin part, it’s probably been Farrenc’s most popular work ever since.

The instrumental makeup of the Nonet was unusual. Although there had been many chamber works mixing winds and strings (including the Beethoven Septet we heard earlier this season and Schubert’s famous octet), until then only Spohr seems to have written one for this particular combination (woodwind quintet, violin, viola, cello, and bass), a combination in which the winds, rather than the strings, dominate. But perhaps it’s not all that surprising that Farrenc made this unorthodox choice—nor that she wrote so mellifluously for winds (as she does in her symphonies, too). For in her mid-teens, she had studied composition with Anton Reicha, generally considered the inventor of the modern wind quintet.

Despite the decision to use an offbeat ensemble, deep down Farrenc was no more a radical than Mendelssohn was, and like his most familiar works, her Nonet is more genial than ground-breaking. But while it doesn’t push any boundaries, it’s filled with melodic warmth, upbeat spirit (most notably in the rollicking Scherzo), and imaginative counterpoint (especially in the fugal music in the finale). Not surprisingly, given Joachim’s presence at the premiere, there’s a cadenza for the violin in the first movement—but Farrenc also gives the other players plenty of chance to show off, both as soloists and as participants in lively back and forth conversation. A perfect piece for a mid-February day when, I’m sure, we’ll all longing for the arrival of spring.

Peter J. Rabinowitz—Have any comments or questions? Contact me at prabinowitz@ExperienceSymphoria.org