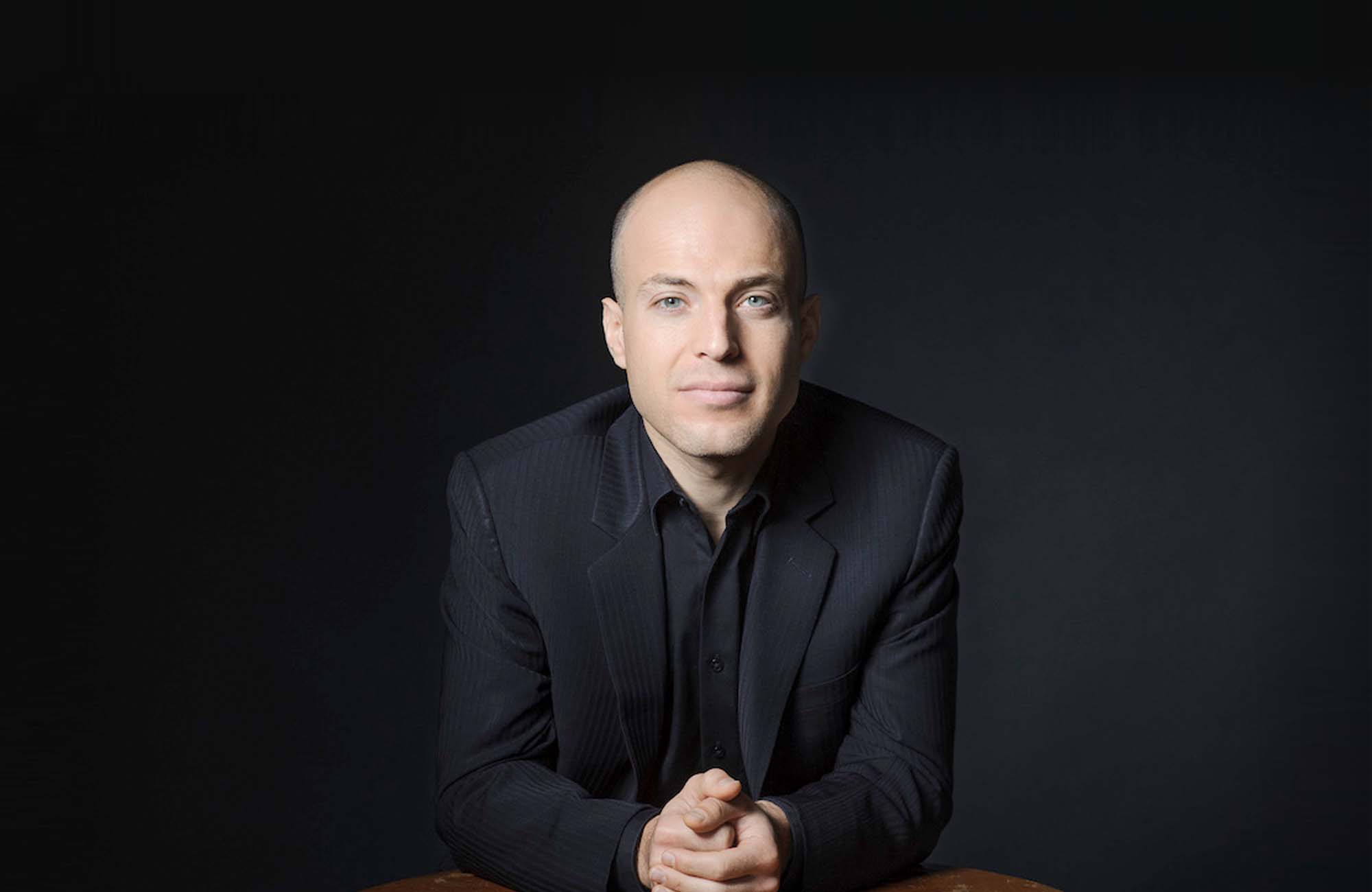 In our “all Brahms, all the time” season opener, Orion Weiss, one of the most sought-after soloists in his generation of young American musicians, performs the romantic Piano Concerto No. 1. The concert culminates with the fourth and final Symphony, a tragic yet triumphant work that will take you through the full range of emotions.

Ask listeners to name their favorite composers, and Johannes Brahms (1833–1897) is sure to be high on the list. He’s certainly been one of the most frequent presences on Symphoria programs; and to launch the 2019–2020 season, we celebrate his art by juxtaposing three popular works in a way that not only provides the pleasure of familiarity but also enriches that pleasure by reminding us of the wide range of his art.

We start off with Brahms the humorist. That might, at first, seem a contradiction in terms, since the prevailing view is that he’s a sober composer. ...
Ask listeners to name their favorite composers, and Johannes Brahms (1833–1897) is sure to be high on the list. He’s certainly been one of the most frequent presences on Symphoria programs; and to launch the 2019–2020 season, we celebrate his art by juxtaposing three popular works in a way that not only provides the pleasure of familiarity but also enriches that pleasure by reminding us of the wide range of his art.

We start off with Brahms the humorist. That might, at first, seem a contradiction in terms, since the prevailing view is that he’s a sober composer. And it’s true that you wouldn’t normally turn to him for the wit of Haydn, much less the acerbic sarcasm of Shostakovich. Still, Brahms was less stuffy than his reputation suggests. And when the University of Breslau (now Wrocław) offered him an honorary degree in 1879 with the expectation he’d give something in return, he fulfilled his obligation the next year with the boisterous Academic Festival Overture. Calling on the largest and noisiest orchestra he ever used, it cleverly weaves into its fabric four once-familiar student songs (including one protest song). Except for the crowning Gaudeamus igitur, they have generally been forgotten, at least in the United States; but even if you don’t know their origins, the tunes have a beer-fueled spirit that distinguishes them from those that Brahms himself usually wrote.

Our centerpiece, the Piano Concerto No. 1, represents Brahms the intemperate or, to quote tonight’s soloist Orion Weiss, Brahms the “hyper-expressive.” This, too, runs against popular belief, which places Brahms among the most self-controlled of composers. But the years 1854–1858, when he was writing this work, were a time of extreme emotional turmoil. The young composer had been taken under the wing of 19th-century music’s darling romantic couple, Robert and Clara Schumann. The triangular relationship, mildly unstable to begin with, took a dangerous turn in 1854, when Robert was placed in an asylum after he tried to commit suicide. Clara could not visit him, but Brahms could.

Serving, to a certain extent, as a means of communication between his two mentors was awkward enough for Brahms; falling in love with Clara—who, probably chastely, returned his passion—left him in an emotional crisis merging desire and guilt. Need more? In 1854, Brahms heard the Beethoven Ninth for the first time—and was immediately infected by its monumental power. No surprise, then, that the First Concerto, in which the ambitious young composer tried to come to terms with the raw, conflicting forces tearing his life apart, is a hot-blooded work, with a tempestuous first movement, a middle movement probably inspired by Clara, and a rondo in which he faces down his demons—at least musically. (In fact, the tormented friendship with Clara lasted his entire life.) Orion sees the finale as Brahms “storming the castle”—a musical equivalent to Henry V’s “Once more unto the breach,” a movement with plenty of darkness that eventually “works itself into a truly joyful ending, one of Brahms’s best.” At the same time, Orion finds evidence here of Brahms trying to find his place in the lineage of great composers, especially in the parallels between the finale of this concerto and the rondo finale of Beethoven’s Third.

We close the concert with the Symphony No. 4, a work representing Brahms the radical, once again contradicting conventional wisdom. Brahms, we’re often told, was the late 19th-century’s strongest defender of traditional values against the onslaughts of such revolutionaries as Wagner. And in a way, he was. But by the time he wrote this symphony in 1884–85, Wagner had already died—and the battle between them, more a product of the critics of the day than of the composers themselves, was beginning to seem a thing of the past. Once outside that media circus, the forward-thinking aspects of Brahms’s music became more and more audible, to the point where Schoenberg—the leader of the most aggressive wing of modernism in the first half of the 20th century—could eventually proclaim him “Brahms the Progressive.”

One key aspect of Brahms’s modernism is his ability to draw maximum musical power from a minimum of musical material. (That’s the bit of Brahmsian genius missed by Hugo Wolf, one of the most ardent Wagnerians, when he sneered that Brahms had mastered the art of composing without ideas.) Take the Fourth’s opening theme. It’s built out of nothing but a chain of falling thirds—but by flipping every other pair so it becomes an upward sixth, Brahms turns it into a sighing theme of utmost poignance. That kind of economy marks the whole symphony—there’s nothing extra, nothing extravagant, yet the totality presents a richness perhaps unequalled in Brahms’s output. Then, too, there’s the rhythmic interplay of Brahms’s inner lines—sufficiently intricate that composer-conductor Gunther Schuller described him as a precursor of Stravinsky and Ives. Yet so assured was Brahms as a composer that he was able to cloak this radicalism in attire that didn’t disrupt late 19th-century norms.

Just as the Fourth blends the traditional and the forward-thinking, so it merges the tragic and the triumphant—which has led to debate about its dramatic trajectory. For some critics, it traces out a descent into darkness. Conductor Larry Loh sees it quite differently. Yes, there are elements of tragedy in the first movement, pointing, among other things, to the “heart-wrenching” second theme. But the second movement “draws us out of that,” beginning with what he hears as “sounds echoing in a cavern.” The third movement, brightened by the addition of piccolo and triangle, is surprisingly “upbeat and positive.” The key to it all, though, is the finale, which bursts forth with the entry of the trombones, silent until now. In structure, it’s a passacaglia, a strict baroque form that consists of a set of variations on a repeating and unchanging bass—in this case, a series of eight chords, loosely based on Bach’s Cantata No. 150. Yet its formal strictness is belied by what Larry calls the “incredible amount of variety” (another example of getting the most music out of minimal material): as it goes through a wide range of emotions, it’s less a set of separate variations than a constant “transformation.” The movement reaches a point of stillness in the middle, as the flute dominates—but then “when the trombones come out of that, it’s like a slow rise and then we get back to the faster tempo. And it ends with a kind of exclamation mark, much faster than you think it’s going to.” A striking conclusion to Brahms’s symphonic output.

2018-19 sees him beginning the season with the Lucerne Festival and ending with the Minnesota Orchestra, with performances for the Denver Friends of Chamber Music, the University of Iowa, the Chamber Music Society of Lincoln Center, the Albany Symphony, the Kennedy Center’s Fortas Series, the 92ndStreet Y, and the Broad Stage in between. In 2017-18 Orion performed Beethoven’s Triple Concerto with the Saint Paul Chamber Orchestra, toured with James Ehnes, and soloed with twelve orchestras around the United States. Other highlights of recent seasons include his third performance with the Chicago Symphony, a North American tour with the world-famous Salzburg Marionette Theater in a performance of Debussy’s La Boîte à Joujoux, the release of his recording of Christopher Rouse’s Seeing, and recordings of the complete Gershwin works for piano and orchestra with his longtime collaborators the Buffalo Philharmonic and JoAnn Falletta.

Named the Classical Recording Foundation’s Young Artist of the Year in September 2010, in the summer of 2011 Weiss made his debut with the Boston Symphony Orchestra at Tanglewood as a last-minute replacement for Leon Fleisher. In recent seasons, he has also performed with the Los Angeles Philharmonic, San Francisco Symphony, Philadelphia Orchestra, Pittsburgh Symphony, Toronto Symphony Orchestra, National Arts Centre Orchestra, and Orpheus Chamber Orchestra, and in duo summer concerts with the New York Philharmonic at both Lincoln Center and the Bravo! Vail Valley Festival. In 2005, he toured Israel with the Israel Philharmonic Orchestra conducted by Itzhak Perlman.

Also known for his affinity and enthusiasm for chamber music, Weiss performs regularly with the violinists Augustin Hadelich, William Hagen, Benjamin Beilman, James Ehnes, and Arnaud Sussman; the pianist Shai Wosner; and the cellist Julie Albers; and the Ariel, Parker, and Pacifica Quartets. As a recitalist and chamber musician, Weiss has appeared across the U.S. at venues and festivals including Lincoln Center, the Ravinia Festival, Sheldon Concert Hall, the Seattle Chamber Music Festival, La Jolla Music Society SummerFest, Chamber Music Northwest, the Bard Music Festival, the Bridgehampton Chamber Music Festival, the Kennedy Center, and Spivey Hall. He won the 2005 William Petschek Recital Award at Juilliard, and made his New York recital debut at Alice Tully Hall that April. Also in 2005 he made his European debut in a recital at the Musée du Louvre in Paris. He was a member of the Chamber Music Society Two program of the Chamber Music Society of Lincoln Center from 2002-2004, which included his appearance in the opening concert of the Society’s 2002-2003 season at Alice Tully Hall performing Ravel’s La Valsewith Shai Wosner.

Weiss’s impressive list of awards includes the Gilmore Young Artist Award, an Avery Fisher Career Grant, the Gina Bachauer Scholarship at the Juilliard School and the Mieczyslaw Munz Scholarship. A native of Lyndhurst, OH, Weiss attended the Cleveland Institute of Music, where he studied with Paul Schenly, Daniel Shapiro, Sergei Babayan, Kathryn Brown, and Edith Reed. In February of 1999, Weiss made his Cleveland Orchestra debut performing Liszt’s Piano Concerto No. 1. In March 1999, with less than 24 hours’ notice, Weiss stepped in to replace André Watts for a performance of Shostakovich’s Piano Concerto No. 2 with the Baltimore Symphony Orchestra. He was immediately invited to return to the Orchestra for a performance of the Tchaikovsky Piano Concerto in October 1999. In 2004, he graduated from the Juilliard School, where he studied with Emanuel Ax.