That popularity is not hard to explain: The Violin Concerto may challenge the technique of the soloist (one reason, perhaps, why Auer initially dismissed it), but it’s a work that offers listeners both immediate attractions and long-term rewards, no matter how often they’ve heard it.

It begins with a memorably hummable theme (like the opening of the First Piano Concerto, it never returns)—a theme ushering in a movement of heartfelt melodic beauty, similar to that of the most lyrical passages in his ballets. It’s followed by a graciously sweet Canzonetta or “small song” (actually, a slightly later replacement for the original slow movement) that moves without pause to a vigorous dance-infused finale, with a strong folk-flavor—as well as a few bittersweet passages that look back to his opera Eugene Onegin.

Listening to this confident work, you’d never guess the anxious personal circumstances behind it. Tchaikovsky was gay; yet for whatever reasons, in 1877 he married a young student he barely knew. Their brief time together was so psychologically devastating for him that he even attempted suicide. Fortunately, a trip to Europe restored his equilibrium. Italy was an especially important part of that cure; indeed, it was right after a two week stay in his beloved Florence that the newly invigorated composer was able to craft this masterpiece in just a few weeks.

Given the salutary power of Italy on Tchaikovsky, it’s perhaps appropriate that we’re
opening the concert with something by Gioachino Rossini (1792–1868): the 1823 Overture to Semiramide. Rossini is best remembered for his comic operas, especially The Barber of Seville and La Cenerentola (Cinderella), but he was equally adept when it came to less lighthearted fare.

And there are few 19th-century operas less lighthearted than Semiramide, based on a tragedy by Voltaire that hinges on political treachery and its consequent vengeance, fueled by incest and murders within the family circle.

The overture, less gory than the opera it prefaces, stands with the William Tell Overture as Rossini’s longest. It’s one of his most colorful, too: From the ominous drum rolls and mournful horn quartet that introduce the work, on to the rousing ending, it’s crammed with brilliant orchestral effects and musical surprises. As for that ending: It’s a prime example (the second in this piece) of what’s known as the “Rossini Crescendo.” A crescendo, in its simplest form, is an increase in volume; but in Rossini’s hands, it’s cannily combined with repetition of musical units (usually, but not always, in groups of three), increases in the number of instruments
(often boosting the tension by adding instruments at higher pitch), mounting rhythmic pressure, and sudden returns to near silence in order to allow another dramatic build. The result here is breathtaking.

Rossini was an admirer of Ludwig van Beethoven (1770–1827), whose Symphony No. 5 (1808) concludes the concert. Yet it’s hard to imagine two composers who are more different. Rossini was a crowd-pleaser and a gourmet (he is quoted as saying “I know of no more admirable occupation than eating”); he was a fast worker who, at the height of his powers as Europe’s most successful opera composer, suddenly retired from the opera house before the age of forty. Beethoven was famously irascible, especially as his deafness developed, and known for living in conditions Rossini called “extremely dirty and in frightful disorder”; he wrote slowly and—especially at the end of his life—he aimed many of his greatest works at connoisseurs. Yet two centuries later, Beethoven is the one with the stronger grip on general audiences, having
emerged as the exemplar of Western art music. And no work is more exemplary than the ever- popular Fifth.

That well-deserved popularity comes with a downside, though, for it tends to obscure the music’s ground-breaking spirit. Take, for instance, the opening theme: It’s as recognizable a theme as any in the classical repertoire, and thus apt to pass you by. But how did it sound in 1808? Beethoven had already experimented, in his Fourth, with an unconventional opening, in that case an introduction that lasted so long that people were apt to wonder whether it was an introduction at all. In the Fifth, Beethoven does the opposite, starting immediately with a theme so short that you’re apt to wonder whether it’s a theme at all.

That’s just the beginning of the Fifth’s radicality. There’s structural innovation as well.
Today’s listeners are familiar with symphonies where the movements are thematically and formally linked—even symphonies in a single movement. But in 1808, for listeners accustomed to symphonies where the movements are independent of each other, the thematic and rhythmic connections between the movements in the Fifth (most obviously, the familiar “Da-Da-Da-DUM” rhythm) were striking. So was the way the third bleeds into the finale with a hair-raising transition. As conductor Larry Loh puts it, the Fifth moves in a “long arc from the beginning of the first movement to the end of the finale.”

Then, too, the blast of trombones that ushers in the finale—the first symphonic
appearance of trombones in the standard repertoire—must have been a jolt. Add in the equally unprecedented piccolo and contrabassoon, and the movement is probably the loudest symphonic music the early listeners had ever heard. And had they ever confronted a work with the continuous rhythmic energy of this one?

Thus, those of you have never the heard the piece before—or have not heard it for
years—are perhaps in the best position to appreciate its power. For the rest of you, it’s probably worth trying to forget everything you know about the Fifth and just let it carry you along.

These performances of the Fifth are dedicated to the memory of Eric Gustafson,
Symphoria’s principal violist, who passed away last November. 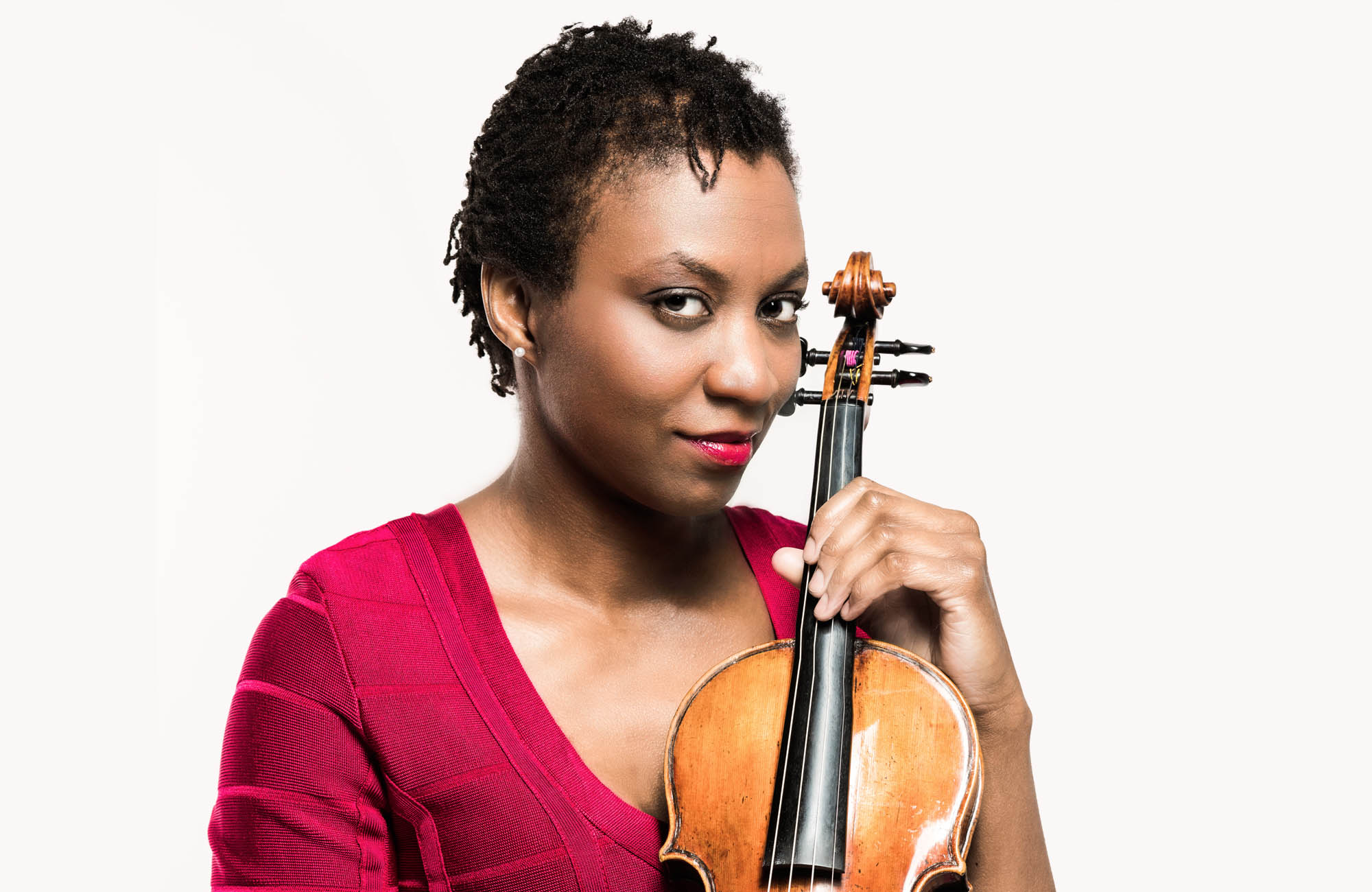 TAI MURRAY | violin
Described as “superb” by The New York Times, violinist Tai Murray has established herself a musical voice of a generation.“Technically flawless… vivacious and scintillating… It is without doubt that Murray’s style of playing is more mature than that of many seasoned players… “
(Muso Magazine)

Appreciated ...
Described as “superb” by The New York Times, violinist Tai Murray has established herself a musical voice of a generation.“Technically flawless… vivacious and scintillating… It is without doubt that Murray’s style of playing is more mature than that of many seasoned players… “
(Muso Magazine)

Appreciated for her elegance and effortless ability, Murray creates a special bond with listeners through her personal phrasing and subtle sweetness. Her programming reveals musical intelligence. Her sound, sophisticated bowing and choice of vibrato, remind us of her musical background and influences, principally, Yuval Yaron (a student of Gingold & Heifetz) and Franco Gulli. Winner of an Avery Fisher Career Grant in 2004, Tai Murray was named a BBC New Generation Artist (2008 through 2010). As a chamber musician, she was a member of Lincoln Center’s Chamber Music Society II (2004-2006).

She has performed as guest soloist on the main stages world-wide, performing with leading ensembles such as the Indianapolis Symphony Orchestra, Royal Liverpool Symphony Orchestra, and all of the BBC Symphony Orchestras. She is also a dedicated advocate of contemporary works (written for the violin). Among others, she performed the world premiere of Malcolm Hayes’ violin concerto at the BBC PROMS, in the Royal Albert Hall.

As a recitalist Tai Murray has visited many of the world’s capitals having appeared in Berlin, Chicago, Hamburg, London, Madrid, New York’s Carnegie Hall, Paris and Washington D.C., among many others.

Tai Murray’s critically acclaimed debut recording for harmonia mundi of Ysaye’s six sonatas for solo violin was released in February 2012. Her second recording with works by American Composers of the 20th Century was released by the Berlin-based label eaSonus and her third disc with the Bernstein Serenade on the French label mirare.