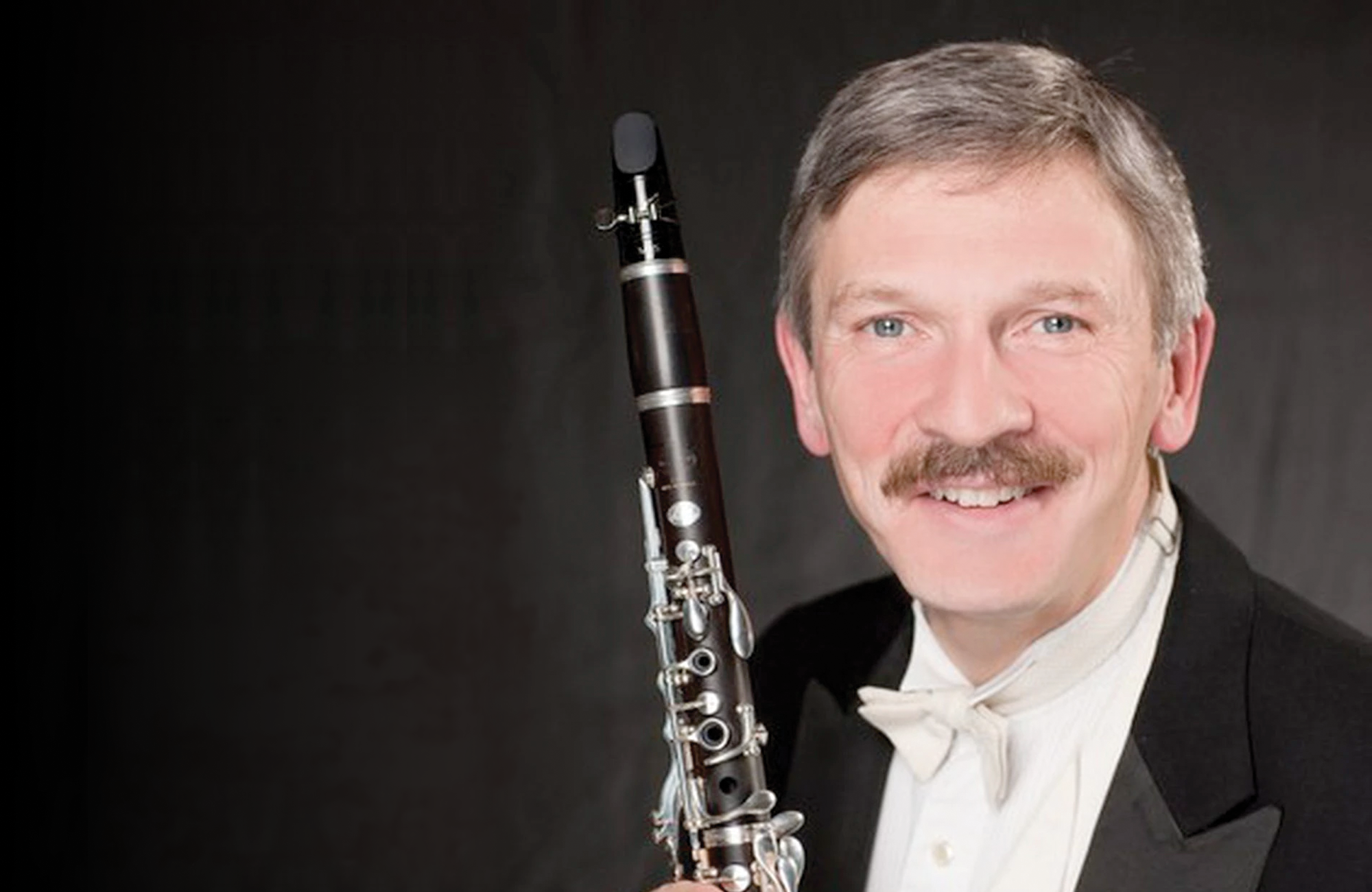 Symphoria’s Casual Series kicks off with Mozart’s most famous work, Eine Kleine Nachtmusik (A Little Night Music) and Foote’s second movement Air from Serenade in E Major. Symphoria’s principal clarinet, Allan Kolsky performs Copland’s Concerto for Clarinet, which was written for jazz clarinetist Benny Goodman . Tchaikovsky’s expressive Serenade for Strings in C Major is sure to end the concert on the right note.

Thanks to our sponsors!

Eine kleine Nachtmusik is probably the most beloved work for strings from the late 18th-
century; the Serenade in C, op. 48, composed by Peter Ilyich Tchaikovsky (1840–1893) in
1880, has the same standing for the late 19th century. And since it was composed under the spell of Mozart, Tchaikovsky’s favorite composer, it seemed an apt choice to end the concert. Don’t, however, expect a neo-classical impersonation: Mozartian inspiration did not lead to Mozartian imitation. Yes, Tchaikovsky was adept at mimicking the past when he wanted to. His Rococo Variations have an 18th-century sensibility, and his Fourth Orchestral Suite, titled “Mozartiana,” is a set of orchestral adaptations of Mozart originals. The Serenade, though, inhabits a different world; while it honors the enduring inspiration of Mozart, it also reminds us of how much things had changed during the intervening century.

This is a deeply romantic work. Tchaikovsky achieves a much bigger sonority, right from
the introduction, by asking each string player to play two, three or even four
notes simultaneously (a technique known as “multiple stops”). The Serenade also features the
exceptionally wide dynamic range and the heart-on-the-sleeve emotionality that marks his
symphonies. The proper minuet and trio of the Mozart has been replaced by a suave and
suggestive waltz (placed as the second movement, rather than the third), a match for any waltz in Tchaikovsky’s ballets; and the restrained Romance of the Mozart has been supplanted by a
heartfelt Elegy. The use of folk tunes in the finale is another mark of the times, when the
romantic ethos often found itself caught up in nationalism. In addition, the work displays the
kind of thematic connections among movements championed by many romantic
composers—most obviously in the return of the opening music at the end of the piece.

In between these staples we have two works that are less familiar—radically less familiar
in the case of the Air from the 1891 Serenade in E by Arthur William Foote (1853–1937).
Foote was one of the ground-breaking pioneers of American classical music. Claimed as the first
to be trained in the United States rather than in Europe (as Gottschalk, MacDowell, and even
Copland were), he got the first Master’s Degree in Music ever awarded in this country. He went
on to become one of the so-called Boston Six, a group of the most prominent East Coast
composers of the time. Yet, paradoxically, his music is solidly grounded in the European
tradition. He had special affection for Mozart, calling his Symphony No. 40 “one of the most
perfect things in existence.” He championed Mozart in his collections for beginning pianists and
edited nine of his piano sonatas. Still, his own idiom was generally more attuned to the later
romantics than to earlier music.

Generally—but not always, and his Serenade looks backwards to a degree that
Tchaikovsky’s does not. Indeed, the Air looks back even beyond Mozart. Foote’s love of Bach
led him to transcribe a fair amount of Bach for piano—and that same love is evident here, since
the Air, with its steady and stately bass line, is clearly modelled on the Air from Bach’s Third
Orchestral Suite. (By the way, Mahler’s version of Bach’s Air will appear as part of the Bach-
Mahler Suite we’ll be offering at our next Casual). Yet this is no simple pastiche, and in the B
section, there’s a kind of desolate intensity that reminds us that Foote was one of Wagner’s early advocates in the United States. He especially admired Die Meistersinger, and it’s not hard to find traces of its third act prelude here.

Aaron Copland (1900 –1990) did not have the same attachment to Mozart that Foote
—much less Tchaikovsky—did. Still, there’s a deep, if circuitous, Mozart connection to his 1948
Concerto for Clarinet. A bit of history: In 1938, jazz clarinetist Benny Goodman reached a
milestone in his career when he mounted the first jazz concert ever offered in Carnegie
Hall—with a racially integrated group of musicians, too. But at about the same time, an
invitation to join an impromptu group to play Mozart encouraged him to expand his horizons and to embark on a parallel career as a classical performer. Just a few months after the Carnegie event, he made his classical debut in Town Hall with the Budapest Quartet—once again playing Mozart. Mozart remained central to his repertoire. But ever the explorer, he not only took on established works by composers like Weber, Busoni, and Nielsen, but also expanded the repertoire by premiering new works (including Stravinsky’s Ebony Concerto) and by commissioning others from composers like Bartók, Hindemith, and Morton Gould. His
commission of the Copland Concerto was arguably his most important.

The concerto upends expectations in several ways. Most concertos have three
movements; this one has two, which are linked. Most begin with a fast movement introducing
the soloist’s virtuoso prowess; this opener, marked “slowly and expressively,” mines the
nostalgic lyricism familiar from such Copland standards as Appalachian Spring—just what
you’d expect of a middle movement. Most concertos have cadenzas (passages for the soloist to
play alone) interrupting one or more of the movements; this one places the cadenza between
movements, where it serves as a transition rather than an interruption. Only when we get to the upbeat finale does the concerto hew to formal traditions. Even here, the presence of jazz, given extra edge by the presence of a piano in the string-and-harp orchestra, makes it clear that this is no standard concerto. The finale also borrows from the music Copland heard in Latin America, where he was touring when he started composing the piece.

Both the cadenza and the last movement offer plenty of technical fireworks—but there
are subtler challenges for the soloist throughout the piece. As today’s performer, principal
clarinet Allan Kolsky, points out, the first movement “demands great sensitivity, control and
delicacy of tone.” And while the cadenza offers the soloist great freedom of interpretation, that also presents a challenge in pacing, “how to introduce new musical ideas, or how to build and release tension in preparation for the final movement.”

The concerto is fairly short—well under 20 minutes—but its range is wide. “Copland
brings out so many special qualities of my instrument,” says Allan—“ the lyricism, the jazziness,
the humor, the virtuosity, and some moments of real emotional intensity, as well.” As a great
admirer of both Copland and Goodman (in fact, an autographed photo of Goodman hangs in his
studio), Allan is especially eager to share this work with us today. I think you’ll understand why
after you hear the performance.

Peter J. Rabinowitz
Have any comments or questions? Please write to me at prabinowitz@ExperienceSymphoria

Mr. Kolsky holds music performance degrees from Temple and DePaul Universities, where he studied with Anthony Gigliotti (Principal Clarinet of the Philadelphia Orchestra) and Larry Combs (Principal Clarinet of the Chicago Symphony). His early teachers included Pasquale Cardillo and Frank Marinaccio. As a student, Kolsky won a Tanglewood Fellowship, performed with the Civic Orchestra of Chicago, and played in master classes coached by Robert Marcellus, David Shifrin and Harold Wright.

A co-host and featured performer at the 2001 conference of the International Clarinet Association, Kolsky taught clarinet for several years at the University of New Orleans. He currently teaches at both Hamilton College and Onondaga Community College as an adjunct Lecturer in Clarinet.

In addition to music, Allan loves great literature, and his humorous, 500-word parody of William Faulkner’s “The Sound and the Fury” won the international 2001 Faux Faulkner Contest. He has also acted in several community Shakespeare productions with the Syracuse Shakespeare Festival. Allan is married to Ellen Somers, the Assistant Director of Syracuse Jewish Family Service.